Navigate Research - Friday, January 16, 2015
Written by Jeff Nelson
The first edition of the College Football Playoff National Championship Game was, by all accounts, a major success. That is especially true for ESPN, which saw the best rating of any television programming in the company’s entire history.
Yes, that’s right. It was the most watched program in ESPN’s history and came in with an overnight rating of 18.5. With that kind of number, ESPN is now even more well-positioned to sell advertisements for next year’s game because it has hard evidence to demonstrate the true value of the broadcast in the market place.

According to Nielsen, the game peaked between 9:30-9:45 EST on ESPN with a 20.5 metered market rating. That rating and the overall rating of 18.5 was a compilation of ESPN’s megacast strategy, broadcasting on 12 different media platforms: ESPN2, ESPNU, ESPNNews, ESPN Classic, ESPN Deportes and ESPN Goal Line; ESPN Radio and ESPN Deportes Radio broadcasts; five variations on ESPN3; and coverage around the world via ESPN International distribution.
As Nielsen points out, this amount of viewers is nearly twice the amount of viewers for last year’s most watched cable show, AMC’s “The Walking Dead.”
Here are some additional stats on just how popular the game was:
• 33.4 million viewers – highest rating in history of both ESPN and Cable TV
• 21% increase from last year’s BCS National Championship game
• NFL Comparison: The three 2015 NFC Playoff games on FOX are averaging 39.3 million viewers.
• 2006 National Championship had 35.6 million viewers. Although that’s more than Monday’s game, in 2006 the game aired on ABC, which is a broadcast channel not a cable channel, ESPN, which broadcasted this year’s game.
• Nielsen's list of the 10 metered markets with the highest ratings:
1. Columbus (51.2) 2. Dayton (43.8) 3. Cleveland (41.3) 4. Portland, Ore. (37.6) 5. Birmingham (36.1)
6. Cincinnati (26.5) 7. Jacksonville (25.7) 8. Knoxville (25.5) 9. Greenville (24.1) 10. Atlanta (23.0)

What to Expect at Super Bowl Central

Navigate Research - Friday, December 05, 2014
Written by Allyson Corbin
As we near the end of the year, many people are planning holiday trips, traditions and treats. The end of the year also welcomes the middle of the NFL season, and sports fans are planning Super Bowl logistics in between wrapping gifts and holiday parties with the big game less than 2 months away.
The average fan watches the Super Bowl in the comfort of their home or favorite sports bar as tickets are pricey and the location isn’t in every fan’s backyard. Coincidentally, the 2015 Super Bowl will be held in our Navigate-West’s backyard in Phoenix, AZ, returning from the 2008 Super Bowl. The Valley of the Sun is excited to have the pinnacle match-up take place in February at the University of Phoenix Stadium, and the city of Phoenix is doing a lot to prepare for all the fans in town.
With every major sporting event, a fan experience area is included to generate hype and excitement for the game. Phoenix is creating a major entertainment district in downtown Phoenix, known as “Super Bowl Central,” and organizers promise ‘super-fun’. The fan-fest campus will stretch 12 city blocks, east of the NFL Experience at the Phoenix Convention Center. The entertainment area will create a destination for fans to experience the Super Bowl in a unique and fun way, to include all things media, sponsor and NFL-related.

The free Super Bowl Central is modeled after the Super Bowl Village in Indianapolis in 2012 and after Super Bowl Boulevard in Times Square in Manhattan in 2014 (New Orleans did not host an outdoor fan experience in 2013). I was in NYC for the 2014 Super Bowl, working for a client who was participating in Super Bowl Boulevard, and I know first-hand how exciting the fan experience area can be. At the Boulevard, more than 1 million visitors created lines that were hours long, and the Arizona Super Bowl Host Committee anticipates a similar turnout due to our 71-degree average high temperatures among other things.
The Super Bowl entertainment area ranges in all activities targeted to families, adults and fans in between. While walking around Super Bowl Boulevard, I experienced many sponsorship activation elements, including the Toboggan Run slide measuring 60 feet high and 180 feet long, various concert series, free pizza from Papa Johns, ice-skating in Union Square, Verizon’s Twitter hashtag campaign #whosegonnawin lighting up the Empire State Building with the team colors, along with several others.

According to president and CEO of the Arizona Super Bowl Host Committee, Jay Perry, many brands who participated in last year’s Super Bowl Boulevard intend to migrate to Phoenix at Super Bowl Central. Organizers also intend to integrate local culture and food, while showcasing the beautiful weather Phoenix offers at the beginning of the year. I’m looking forward to perusing Super Bowl Central and experiencing all that the host committee has put together.

Navigate Research - Monday, November 24, 2014
Each Monday, we will share some great activation practices throughout the sports and entertainment landscape. This blog will serve as a space to highlight innovative ideas and campaigns. Want to have your idea or campaign featured? Send us a note on Twitter at @Navigate_Res.

In efforts to enhance fan experience, the PGA Tour Shriners Hospitals for Children Open added six pools at the TPC Summerlin Golf Course in Las Vegas. The pools were placed at the final three holes of the course and will allow attendees to take a dip while enjoying the action on the course. The pools give the course a “club scene” feel and will attract a younger crowd to the tournament.
The Shriners Open wanted to create new entertainment options for their fans, while sticking to the ‘day-club’ feel of Las Vegas. Adding these pools will also allow for more sponsorship and engagement opportunities for brands. Two of the six pools are a part of the Zappos Fan Experience – which includes a variety of other interactive games and golf activities.

Pools and party decks seem to be popping up more and more among the sports world. The Jacksonville Jaguars added pool deck cabanas to its end zone this past summer. Companies and or fans can experience the game poolside on the 100 level for $12,500 – which is all-you-can eat through the third quarter. The Jaguars are hoping that the cabanas will draw larger crowds and high-level business executives to the games. 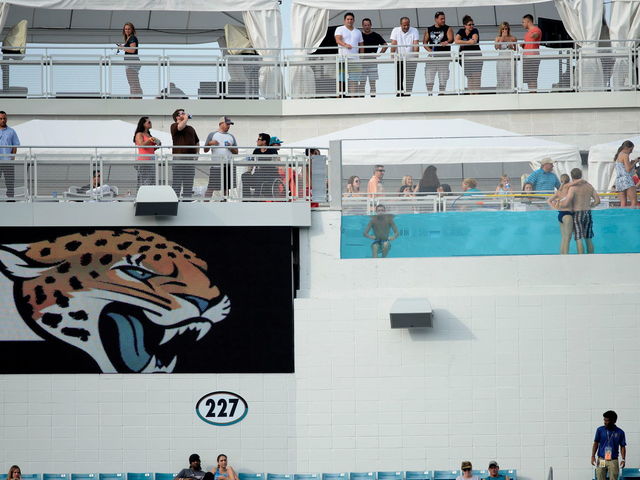 Adding pools to stadiums and golf courses is definitely an innovative way to engage with consumers and enhance the fan experience, and they seem to becoming more and more popular. In places such as Las Vegas and Florida where it’s warm almost year-round, adding these features is a smart marketing move because properties there are able to leverage something that is unique to them: the weather.

Monroestar Inc - Thursday, November 20, 2014
Professional sports leagues have been teaming up with clothing retailers and different celebrities in hopes to broaden their female fan base and stray away from what they call the “shrink it and pink it” methodology of selling women’s sports apparel.

Most recently, Kristin Cavallari, current reality star and wife of Chicago Bears quarterback, Jay Cutler, partnered with NFL Women’s Clothing and Junk Food Clothing to create her own line of NFL Women’s wear. The NFL licensed every team logo to Cavallari and Junk Food for her collection, which debuted at New York Fashion Week last Fall .

Currently, the NFL has 49 million female fans , but there’s still room for growth. Partnering with a celebrity such as Cavallari gives the NFL a shot at reaching a wider range of females, who may not be interested in football, but are fans of Cavallari. She is very active in the social scene. Cavallari has more than one million followers on Twitter, where she actively promotes her clothing line and is constantly interacting with her fans.

Actress Alyssa Milano also partnered up with the $1.2 billion company, G-III Apparel Group , who has licensing agreements with all of the major sports leagues, including NASCAR, to create her sportswear line, “Touch.” Unlike Cavallari, Milano’s line caters to all sports, not just the NFL, which in turn amounts for more exposure among a wider range of fans. Similarly, Milano is also big on Twitter, with more than three million followers amongst her social media channels.

Licensing deals like these can be very lucrative for both the retailer and the sports league. In 2012, Licensing Industry Merchandisers’ Association (LIMA) stated that total sales in both collegiate and professional sports was worth upward of $12 billion . With the league generally receiving a percentage of the sales, these deals have the ability to bring in a vast amount of money.

Partnering with unexpected sources as well as celebrities are great ways to broaden the reach on fans, and in this case create more sponsorship inventory. The NFL generates around $1 billion alone on merchandise and licensing , so it’s no wonder pro leagues are licensing logos out to more and more retailers. Teaming up with Cavallari and Milano was a smart move by these leagues, because not only are they going to reach a different crowd, but will be bringing in the dollars from their licensing deals at the same time.