Navigate Research - Friday, May 01, 2015
For those die hard NFL football fans, the time between the Superbowl in February and the first official game come September, can seem like an eternity. Thankfully, there is training camp, pre-season games, and, of course, the annual NFL Draft to get fans excited for the upcoming season. While often times the first few picks may be an easy guess, there is nothing more exciting to a football fanatic than to see some of the best college football players sign with their team.
This year's NFL Draft is currently taking place in Chicago for the first time since 1964, as it has been held in New York City every year since. While this is not the very first NFL Draft hosted in Chicago, this year marks the first NFL Draft Town festival for not only Chicago, but the league itself. What is the Oikos Triple Zero NFL Draft Town and what can you do there? For those lucky individuals who have attended an NCAA Final Four, it will look something like a Bracket Town or Fan Fest filled with activities for people of all ages (especially kids). The NFL Draft Town is a 3-day long event with activities ranging from participating in a NFL combine activities, practicing your field goal kick, floating in a wind tunnel skydive simulator, and listening to live music and dance performances, to name a few. 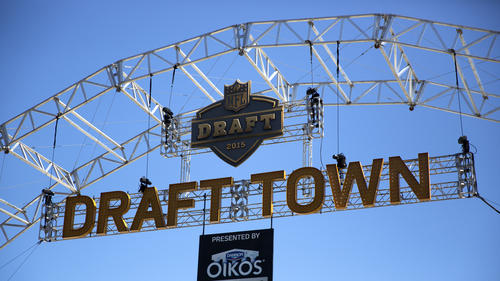 In addition to the numerous activities put on by the NFL, there are several official NFL sponsor tents and activities including the Xbox One Tailgaming where fans can showoff their video gaming skills and the Wilson Football Factory, where you can see how official NFL game balls are individually produced. As an official NFL sponsor, this first of its kind event is a must for brands to display their association to the NFL. This event allows sponsors to get a jump-start on their NFL sponsorship activations and to engage with football fans sooner.
Will the NFL continue to put on this free 3-day event for fans? According to ESPN Chicago's, Jon Greenberg, "Spending the day in Draft Town "reiterated an immutable life lesson: The NFL, through its many trials and tribulations, is still No. 1." With a statement as strong as that, it could bode extremely well now and into the future for the NFL. But is it feasible in every city? Luckily, Chicago has the means to attract thousands of football fans from all over the mid-west to attend the event, however, this doesn't necessarily mean Chicago will come out financially on top after hosting the 1st NFL Draft Town and the NFL Draft itself. However, given it's already successful start, Chicago may have a solid shot for having The NFL Draft returning to The Windy City.